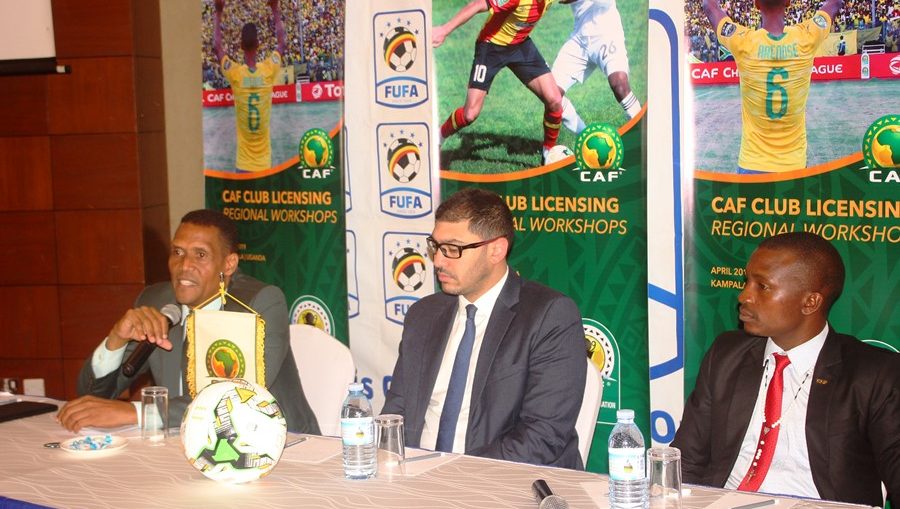 Confederation of African Football Association (CAF) is largely impressed by the gradual path and progress for Uganda in implementing the club licensing tool.

‘The CAF Club licensing tool is to ensure that federations are well organized. CAF is impressed by the path taken by Uganda. We keep monitoring and have realized how well organized FUFA has been in recent times. We are happy that FUFA accepted to host us for the CAF club licensing regional workshop. The Club licensing tool takes focus in five key priority areas of Sporting criteria, Infrastructure, Administrative and internal criteria, Legal criteria and financial criteria. We are very proud with the Ugandan situation since they have exceled and it has been shown by the back to back qualification to AFCON in 2017 and 2019, KCCA and Vipers’ progress on the continent and this reminds me of Iceland that has perfected the club licensing tool in Europe” CAF Club licensing manager, Ahmed Mohamed Mohamed Mokhtar Harraz remarked.

FUFA CEO, Watson thanked CAF for the honour to host such a high profile workshop.

‘It is a big privilege for FUFA and the entire Country Uganda to host such  a unique event. This is the first time ever that Uganda is hosting the CAF Club licensing workshop. Since, 2012, we all embraced the tool of club licensing as a tool of development. We have a very firm and solid committee. Coming next season, FUFA has set new requirements that clubs in the first and second division must meet. Another wave is going to the clubs through the club pro agenda. It was initially by request, but now, it is mandatory.’ Stated FUFA CEO, Edgar Watson.

With the first batch of the CAF Club licensing regional workshop done and dusted on Tuesday, more delegates are arriving ready for the second session that will kick off on Thursday, 25th April 2019 and climax on the following day.