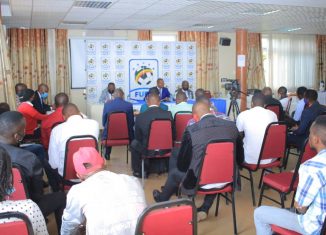 FUFA has held yet another successful media engagement today with the members of the fourth estate building on what was organised in 2014 (Lugogo), 2017, 2018 (FUFA Technical Centre-Njeru) and 2019 (Imperial Royale).

Today’s event is the first of the quarterly meetings this year between the local soccer governing body and sports media, held at Jevine Hotel in Rubaga, Kampala on Tuesday, April 6, 2021.

The FUFA Communications Director Ahmed Hussein was the event’s moderator.

Eng. Magogo hinted on the significance of the interface and FUFA’s progress since 2013 when he took over office, highlighting the success story in the eight (8) focus areas of FUFA.

‘We thought it was very important to have an engagement with the media. We are open-minded. Since 2013, the game of football was still in recovery. By the time we came into administration, the game had moved to the point of take-off. For instance in 2013, there were only 8 employees of FUFA. Today, there are 60 employees. The national teams have improved a lot. There is a lot of improvement on quality of the human resource, communication and governance issues. The financial resources have increased from Shs 4 billion to over Shs 40 billion now. There is improved relationship with Government. No existing administration can operate without the Government. We need Government, there is a lot that we need from Government; CAF and FIFA, Uganda Olympic Committee, National Council of Sports (NCS), media and everybody working for the well being of football. Football needs an environment to develop’ noted Eng. Moses Magogo

In his address, the FUFA President further elucidated on the federation’s progress in the FUFA 8 areas of focus; Governance, Infrastructure, Football Development, Equipment, Facilities and Infrastructure, National Teams, Competitions, Marketing and Communications, Administration and Finance then Membership.

He hinted on the federation’s new technical agenda of rebuilding the Uganda Cranes with key priority of qualifying for the 2026 FIFA World Cup.

The new system will cater for the rebuilding of the Uganda Cranes. Teams are built in cycles.

It is unfortunate that we did not qualify for the AFCON Finals for the third successive time. When i came into this office I said I do not want to be judged by qualification. I want to be judged by creating systems that help in the development of the game in the country. Even the best teams in the world win or lose some matches. What you do is go back and do analysis of the losses and react for the best football results.

‘There are five key factors that help in getting successful football results and these are; Infrastructure, Coaches, players, logistics and motivation’ added Magogo.

The FUFA President also declared his intentions to contest for another term of office.

‘My term comes to an end on 31st August 2021. We believe we have ideas. I will stand for the post of FUFA President again’ Magogo told the media.

‘As FUFA, we are currently undertaking various projects at Kadiba, Lugazi, beach soccer facilities in Njeru and the on-going renovation exercise at FUFA House. These are projects we are handling seriously’ disclosed Justus Mugisha.

Members of the media openly expressed themselves with varying opinions and many had concerns that needed clarification.

Kiiza gave an insight of all the FUFA competitions with a systematic return to full action in the midst of the COVID-19 Pandemic.

‘We are engaging Government on how best the rest of the other leagues will return after the Uganda Premier League and FUFA Big League. FUFA has met the costs for the COVID-19 of players, officials and referees. Soon, we shall have the National Beach Soccer League, FUFA Women Super League and Elite League. The other leagues will also return systematically’ Kiiza hinted.

This was yet another engagement of FUFA with the media following the first of its kind held at Imperial Royale Hotel last year.